This site is still in development, and we haven't got a responsive version live yet. Please view this site on a desktop or laptop. Thanks :)

Garden4me raised garden planters made their RHS debut at the new Chatsworth Show in June.

For those fed up with the chore of daily watering over the summer months or not enough room to grow fruit or veg the ingenious range of easy-to-use, space-saving raised garden planters from garden4me was launched at RHS Chatsworth Flower Show.

Boasting 20 litre built-in self-irrigating reservoirs, so daily watering even during the hottest of summers can be a thing of the past, the Garden4me planter range has been designed to make gardening easy for everyone. Ideal for people with limited space for use on patios, terraces, balconies and gardens, they are suitable for all age and ability groups at home, school, office or community group. They are also the perfect height for wheelchair users.

Clever touches include double-walled construction, to keep soil warm and encourage plant growth, plus the self-irrigating reservoir with capillary action and capillary matting. With a lifetime guarantee against rotting, the planters can be assembled in just minutes without the need for specialist tools. The range is the brainchild of a former engineer who wanted to tackle the practical challenges of gardening in one simple solution.

Available in five standard colours – three granite shades, one lime green, one yellow/black – as well as bespoke colours available on request, the planters are large and deep enough1 to grow a host of crops including root vegetables, fruit, herbs or whatever blooms take your fancy!

“Our planters offer something for everybody. They are perfect for school children, communal growing groups, the elderly or those who are less able to dig, and in equal measure those who have limited growing space but still want to enjoy perfect gardens or grow their own food. They are already proving popular amongst all groups and exhibiting them at RHS Chatsworth is a great opportunity to show it to the widest possible audience.”

To show the fullest extent of the potential of garden4me giant planters to create genuine gardens, our dark granite version is hosting a Japanese inspired garden which features: 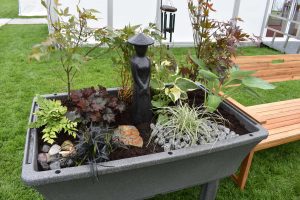 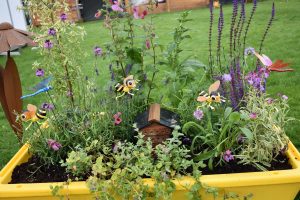 Patio Gardening – to Show the potential of garden4me when used on a patio our bright green planter includes the following plants: 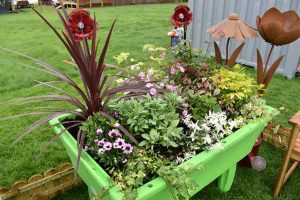